Since early spring 2020, the virus known as COVID-19 has ravaged the United States and the world. At the time of this report, the global number of confirmed coronavirus cases is over 2.5 million, with nearly 180,000 deaths worldwide1—figures that have increased exponentially each week since January. The United States has topped the list of confirmed cases for some time now, and now totals nearly 850,000 (a number that is potentially much higher, due the lack of widespread available testing).

As more information becomes available about the virus, it has become evident that certain populations are at a higher risk than others: People who are 65+, and/or those who live in a nursing home or long-term care facility. People of all ages with underlying medical conditions, like chronic lung disease or asthma, heart conditions, obesity, diabetes, kidney or liver disease, or who are otherwise immunocompromised.2

Recently, the infection and fatality rates of specific populations have seen a sharp increase, pointing to an additional risk factor: race/ethnicity.

Why such disparities, and what makes these populations seemingly more vulnerable to COVID-19?

Experts, like those at the NIAID, have long recognized that racial and ethnic differences affect susceptibility to infection and disease.5 Economic inequality also plays a contributing role: one in five African Americans (22%) and Hispanic Americans (19%) live in poverty, compared to one in 10 (9%) of white/Caucasians.6 And as of the fourth quarter of 2019, African American workers had the highest unemployment rate nationally (5.7%), followed by Hispanic workers (4.1%), with white/Caucasians at 3 percent.7

In a relatively short time frame, it has become clear that COVID-19 is causing additional burdens on Americans already considered vulnerable—and the impact of the pandemic will only continue over the coming weeks and months.

Low-income Hispanic Americans are the most financially impacted.

When looking at the impact by race/ethnicity, the impact is the greatest on low-income Hispanic adults: One in three (34%) report a large financial impact, compared to African-American and white/Caucasian respondents (25% each) in the same income bracket. 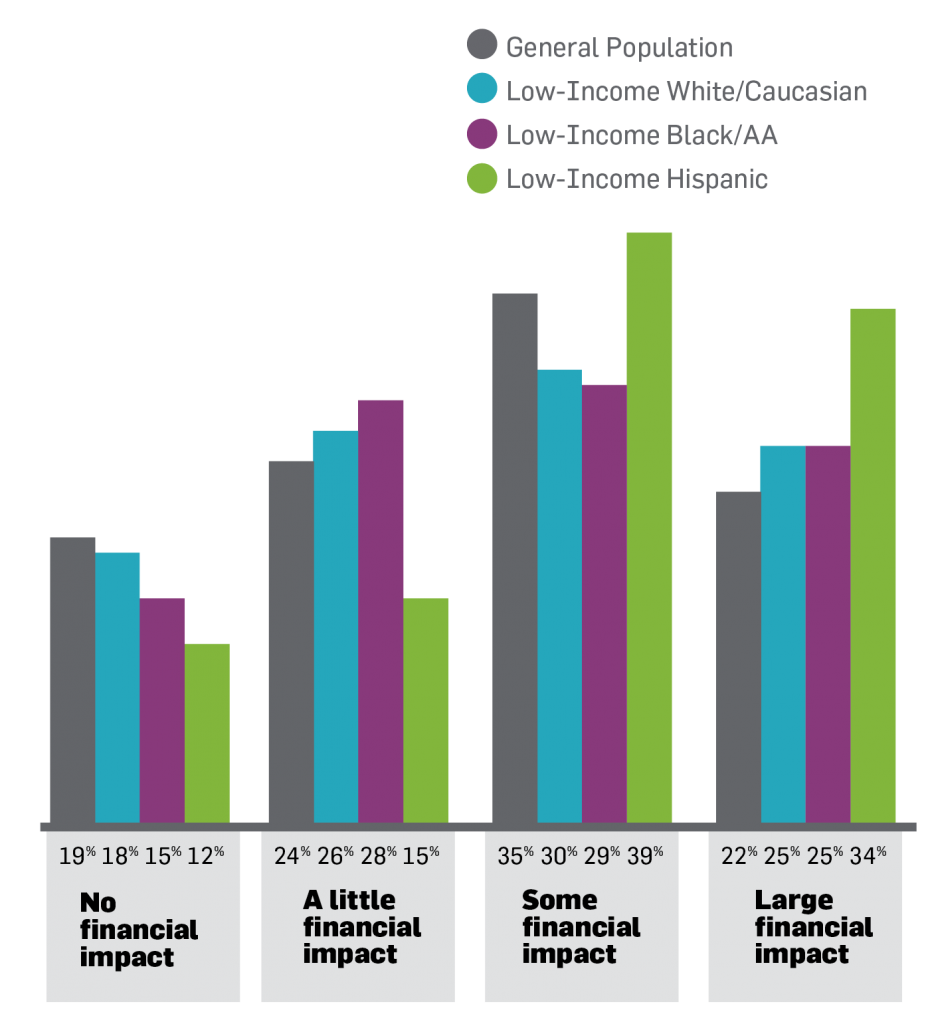 Compared to those with higher HHI, lower income populations also have much greater immediate needs. Among low-income respondents, African American and Hispanic adults have even greater needs than low-income white/Caucasian ones. For example, getting PPE like gloves and/or masks tops the list as the item all populations most need—though the need is much greater for low-income people of color.

Across the nation, thousands of people turned to social media to share their struggles in finding face masks, gloves and PPE. In the nearly 20,000 posts emerging online over the past 30 days, an alarming 94% of mentions stemmed from those states hit the hardest by COVID-19. 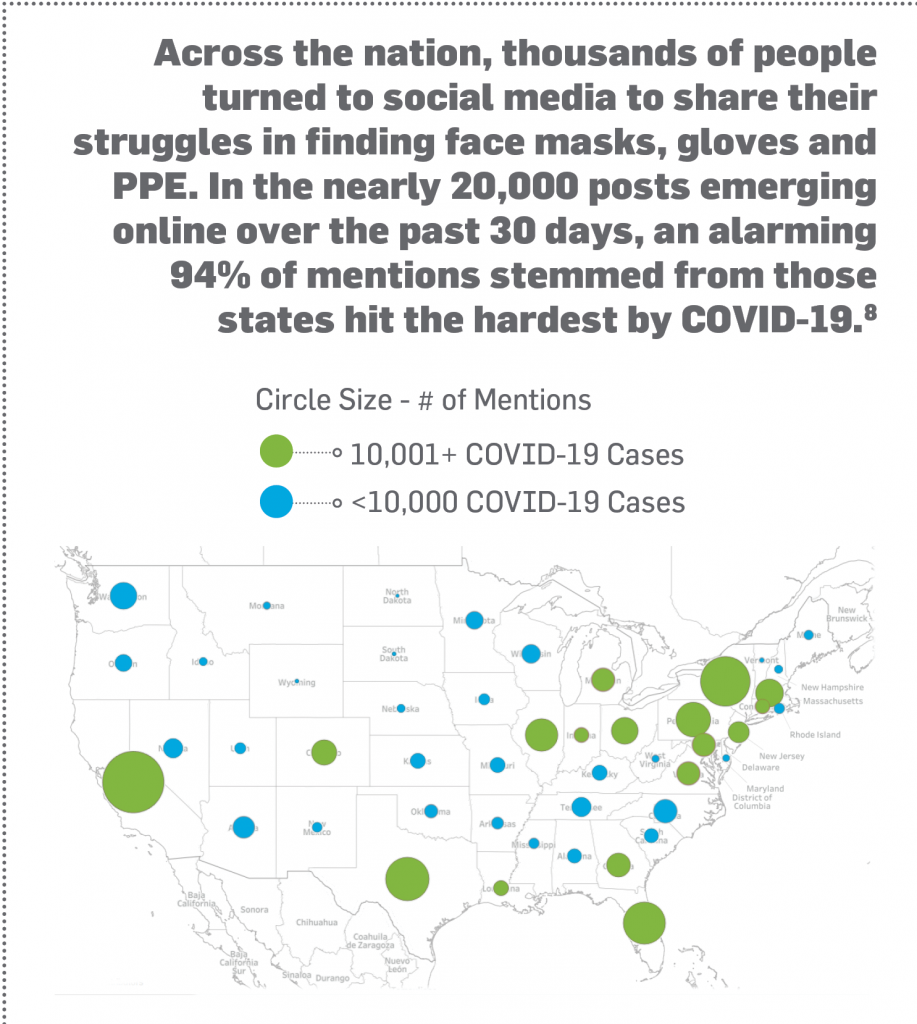 Low-income African American and Hispanic adults also report needing significantly more help than the general public (and than low-income white/Caucasian respondents) with numerous other items, including: 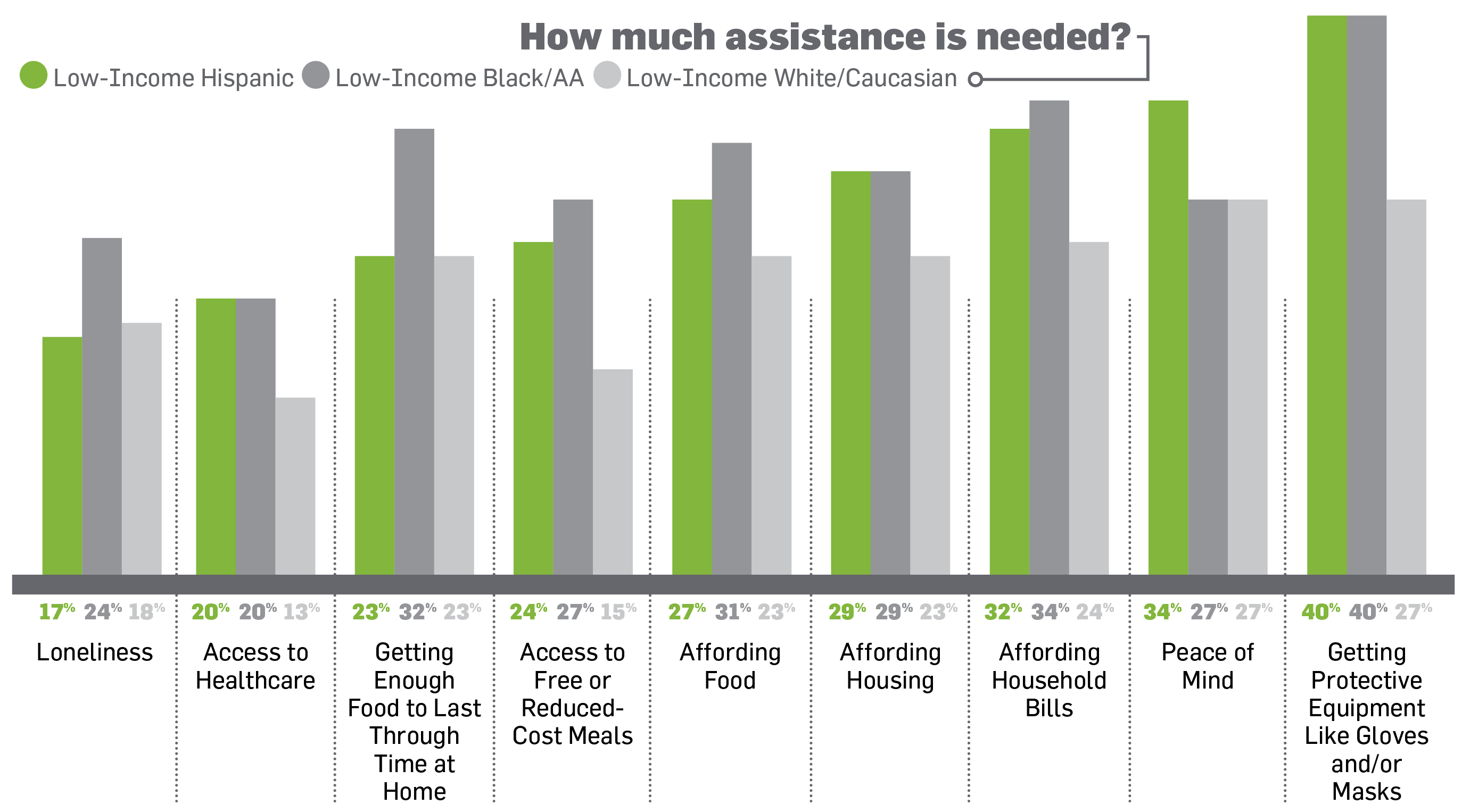 How much assistance is needed?

Low-income Hispanic adults are more worried than the general population.

Low-income adults overall are much more worried than the general public about increased crime, increased discrimination, losing their job, ability to pay bills, being furloughed, a loss of civil liberties, their own health, and their mental health and that of friends/family. 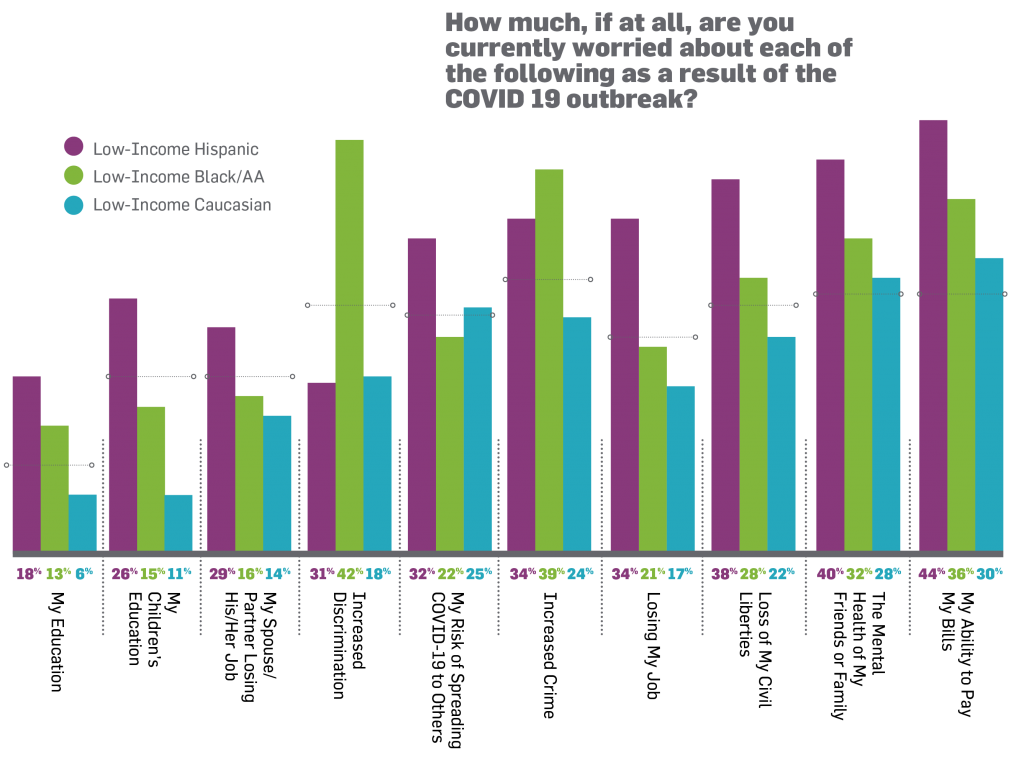 Low-income Hispanic respondents are much more worried than the general population on topics like: 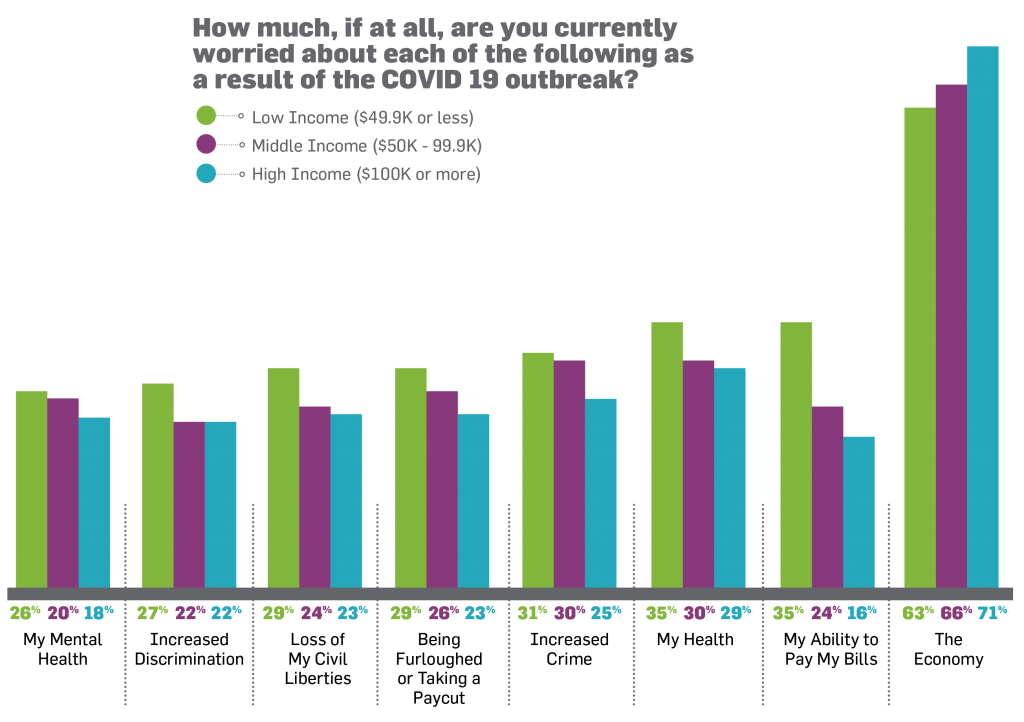 Finding 4: Low-income African American adults feel the most positive, while low-income Hispanic adults are the most tired.

Gratitude and hopefulness continue to be the top emotions reported by Americans. 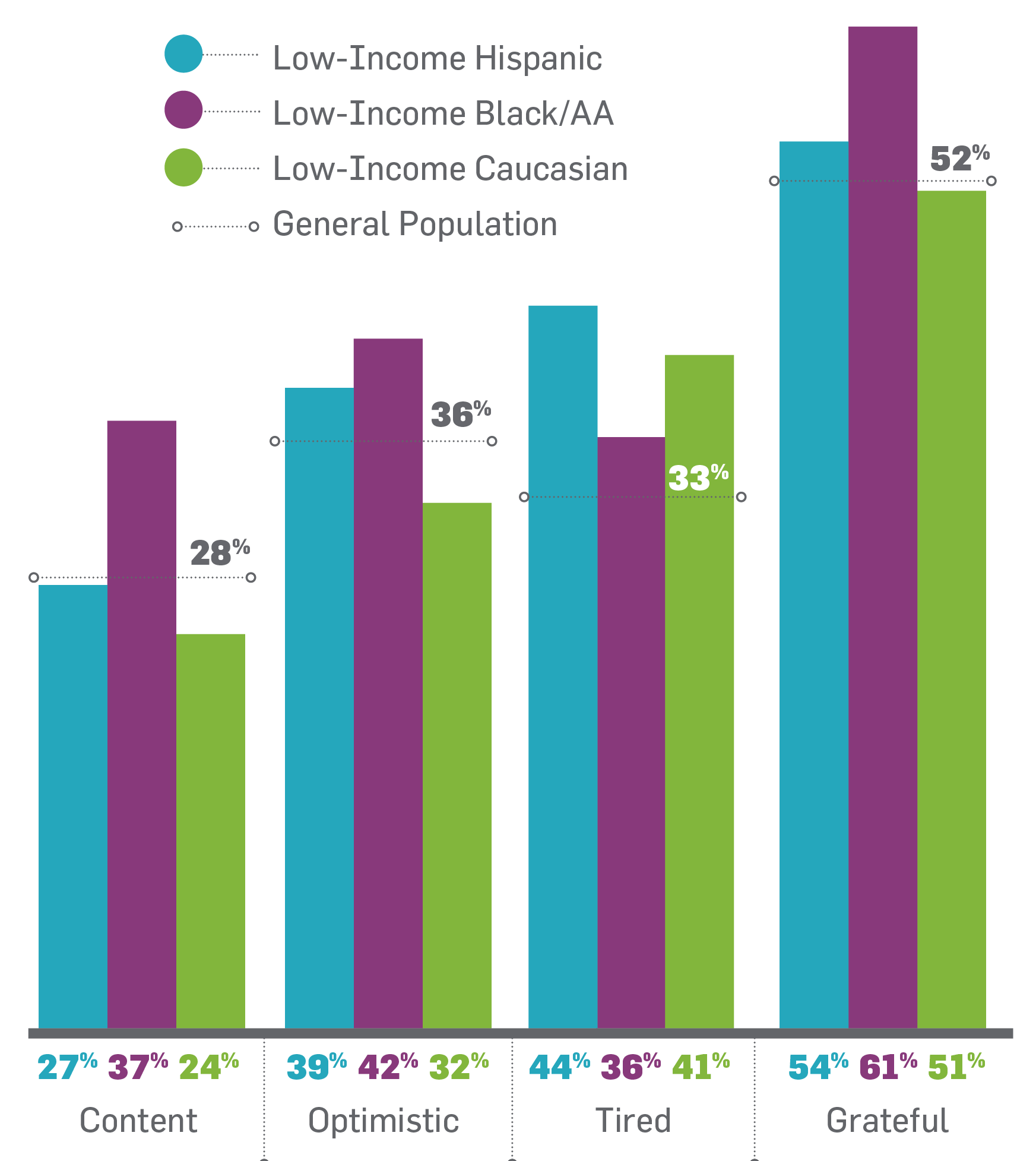 How low- income people are feeling

Previous reports as part of this study have found that the financial impact caused by COVID-19 is closely correlated with having positive or negative feelings. However, additional factors could also impact a respondent’s emotions, such as:

The importance of connections are reinforced on social media as well. In addition to an incredible influx in video conferencing mentions, many users have also been including visiting family and friends in post-quarantine bucket lists.

Americans with higher incomes are much more likely to know someone who has/had COVID-19.

People who know someone who has/had a COVID-19 Infection

As the COVID-19 pandemic continues, uncertainties abound for Americans across the country.

Low-income Americans, especially those who are African American or Hispanic, are feeling the impact of the virus more than others. And while these populations report positive emotions, they have real, tangible needs that aren’t being met.

Before the COVID-19 crisis, low-income Americans—especially those who are African American and Hispanic—were already at a higher health risk. They already face financial inequalities, and they’re being hit even harder financially due to the pandemic. They need help making ends meet, and they’re worried about their families and loved ones.

This research is designed to uncover the needs and worries of the most vulnerable Americans during this crisis, and to help brands, the media, causes and foundations understand how they can adequately address these needs. Now is the time for these leaders and organizations to step up and support these Americans when they need it most.